Q. Though the Beatles as a group are no more, I wonder if there are others like me who still groove on them, like to collect stuff about them, and feel deserted since there are no more fan clubs?

A. Yes, there are many Beatlemaniac’s, the leading one being Dave Morrell, who recently held a Beatle freak convention at his home. Collectors and fans came to trade treasures, for Morrell’s amateur inter- est in the subject is unending. He spends all his time corresponding with other Beatle fans, telling them what’s for sale, where the rare shops are, and what’s to be traded. Morrell’s address is Post Office Box E, Kearny, NJ.

Now I was getting 50 letters a day. I would call those that were close by and included phone numbers. One of them was from a kid a few miles away in Clifton, NJ. His name was Ron Furmanek.

Ron was fifteen years old and moments away from dropping out of high school. He couldn’t drive so I went to meet him. He told me to meet him at a pizza joint across from the firehouse. First thing he did was point to the jukebox and tell me how he’d leave little notes on the back for the man who would come to change the records each month. Ron would ask the man to save him the rare ‘made only for jukebox’ records. He said it worked and when we got to his home he showed me a few that you could never buy in a store. They were fantastic. One was a mini album of “Beatles Second Album” that I’d never seen.

Ron’s home was normal. A loving mom with a huge smile in the kitchen, dad in the living room, engaging, easy going, and friendly.

Then we got upstairs.

First you had to go through Ron’s big brother’s room to get to his. His brother’s room looked like a record store. The posters on the wall were the kind you would only see in a record shop. You couldn’t buy posters like these. The Faces, Neil Young, Gordon Lightfoot and Frank Sinatra covered his walls. Then I began to enter Ron’s room. It was unbelievable. Head to toe, every square inch of the entire room, including the ceiling was covered with Elvis and the Beatles. Even the light switches were covered, from large 6-foot posters to tiny cutouts from old newspapers.

Ron had a huge blow up of the cover of Life magazine from Asia with the Beatles on the cover. The text read “The New Far-Out Beatles” and “Marijuana’s Turned-on Millions.” It was stunning. John was wearing a cape in the photo. Ron also had the American version of Life magazine for that week, but the picture of the Beatles was on the inside. I wondered how on earth he could get something like that all the way from Asia. Then he showed me a Beatles 78 r.p.m. official record from India. It was a beautiful sight but how did he get it? Where do you buy 78’s? And if you could find them, how did one from India show up in America?

He showed me two copies of “Introducing the Beatles” on Vee-Jay Records. They looked the same to me on the cover, but when he turned them over, both records had a few different track listings. I would have never noticed it without it being pointed out.

The highlight of his collection was the ‘Meet the Beatles” motion display. It was large and the Beatles heads would move from side to side. I had never seen it before. He even had a mint unused one in it’s original box in his closet. He also showed me what he considered to be the second greatest promotional piece ever made. It was the HELP! display. It was a motorized box that opens with hands popping out, and then closes. There were Beatle photographs on all four sides and on the top. It was large!

Turns out Ron had been collecting records since he was a very little boy. He kept exceptional care of his records. He’d not only have the picture cover in plastic, but the disc too. These were mint records.

Ron’s collection at that young age was incredible. With every new gem came a story that left me speechless and my jaw dropped. He didn’t even drive, but he was driven to collect the rarest records I have ever seen.

Ron & I began a journey together. We were all over the city scouting places for rare records and any Beatle memorabilia. We started meeting on Saturday mornings on the corner of Fourteenth St. and Broadway and making the rounds through all of Greenwich Village, East Village and West Village to every record store, book store, movie memorabilia store, second hand junk store we could find and there were many of them in those days.

The original Golden Disc on W. Tenth St. was the last stop in the Village on our route and guess what? Ron had a job working there. His hands were on the rarest records and he knew the subject well. 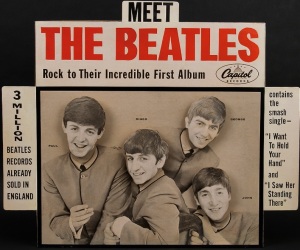 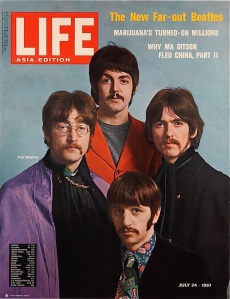